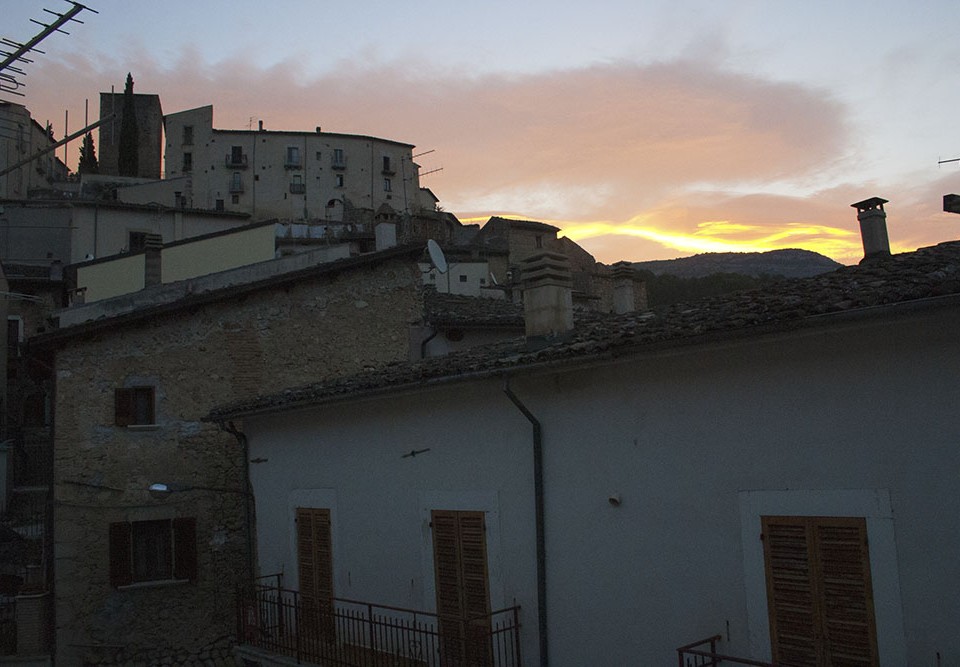 After eight torturous months of recovery from a spinal injury and complications from my rheumatoid arthritis, I find myself thousands of miles from the bed to which I had been confined for so long.  The clean scent of damp stone is wafting into the kitchen through the open doors of the terrace while rain pours down outside. The little city that was so full of life yesterday now seems deserted, the silence only punctuated by the rolling thunder. I’ve decided to record my dream-like experience in Castel di Ieri while taking cover inside before the memories begin to fade.

After a journey that had spanned over 24 hours due to our flight being delayed during our layover in Germany, my mother and I had finally reached the last leg of our trip. We sat bedraggled and exhausted on the train that would deliver us to Abruzzo. About halfway through our train ride the conductor stopped announcing the stops and as the sun set, the sparse signage outside became nearly impossible to read. Our apprehension grew as we approached our stop. By then it was pitch black. The time came that we were supposed to arrive at our stop in Goriano Sicoli and the train pulled into a small station that looked deserted. There were no signs in sight. While were debating whether it was the right stop, the door buzzed meaning it was time to close it because the train was about to pull away.

Sure enough, after finding a passenger that spoke English and asking what station was next, we discovered that we had indeed missed our stop. I felt a small twinge of panic. I wasn’t in New York City anymore, although it was only about 9:00 at night I knew this was probably the last train.

We got off at the next stop and realized that Thierry, the realtor I had been corresponding with for months, had sent us worried text messages. He was supposed to pick us up at the station and take us to our B&B. I called him back, concerned that he was going to be irritated that we were causing him so much trouble. But after I explained what happened he promptly told me that he’d be there in 20 minutes to pick us up, and to wait at the bar nearby.

We went to the bar, bought a couple slices of cold pizza and two little bottles of wine and toasted our successful arrival in Abruzzo. Shortly after finishing our pizza our little celebration was interrupted when we heard a man calling my name. A slim man in his early forties with kind hazel eyes approached us. His dark grey hair had streaks of silver in it and was slightly tousled as if he had been running his fingers through it with anxiety. Italians have excellent hair.

He was relieved to find us alive and in good spirits. He grabbed our luggage and guided us to his waiting car. He made small talk with us in his unsure English and drove us around winding roads and through a medieval city. The narrow cobblestoned streets were flanked by white houses with terracotta roofs that crouched close together. Tiny black iron gated terraces hovered above us at different heights. It was hard to believe Thierry’s explanations that these pristine homes had stood for thousands of years.

He took an intermission from his tour to take us to his favorite gelato shop. There he bought us both a cone of the most delicious gelato I’ve ever had and we chatted some more while happily munching away. We hopped back in the car and he took us on a road that wound its way to the top of a mountain. From that height we could see clusters of lights that represented the four cities that cascaded down the sides of the mountains into the valley.

Although excited, at this point we were totally exhausted so Thierry drove us to Castel di Ieri.  When we drove through the center of town, we noticed a large group of people crowded around a temporary stage where a man was crooning in Italian. Thierry explained to us that we’d come just in time for the Feast of Saint Donato (the patron saint of the city). Thierry delivered us to our B&B which was a five minute walk from the center of town. We were shocked to find that we would have the whole three-bedroom villa to ourselves for our stay. The little medieval villa was indicative of the style of traditional homes in the city but the inside had been newly renovated and decorated in a fifties style. 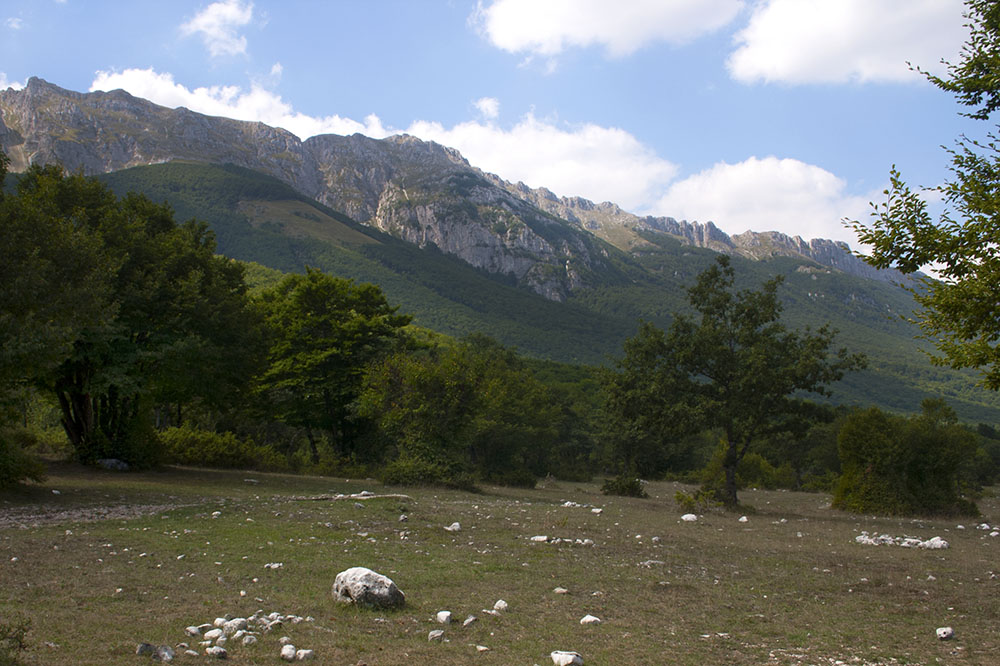 The next day Thierry took us on a tour of all the properties that I had selected online. He stopped in the middle of our tour to take us to the Parco Naturale Regionale Sirente Velino, which is a regional park that includes the Sirente Mountains. The first thing that struck me was the silence. Living New York all kinds of sounds become white noise to you; ice cream trucks, distant car alarms, your neighbors arguing. At the park was total silence. The second thing that struck me was the crisp purity of the air.

Next Thierry took us to a property that wasn’t on my list but he described as “very special”. He took us up the hill, down stairs from the main street, and to an area that had been overgrown with vegetation. While spending time fighting back some particularly aggressive blackberry bushes to make our way to the front door, I became skeptical about the condition of the inside of the house. Once I walked inside the front door though, I was sold. Unlike many of the houses I looked it, the first floor was completely livable. It looked like a young couple had been living there because although it had some antique pieces, a nod to the home’s origins, it was combined with some modern decor. The bathroom was newly renovated and absolutely beautiful. He went on to show me three cellars and an attached barn that were not finished but filled my head with possibilities. I knew this place was the one for me.

The following day I was awoken by what sounded like bombs going off, the force of which sent vibrations through the little villa where my mother and I were staying. I sat up in bed, alarmed. My mind was still a little foggy from being up late enjoying the festivities of the previous night. The city had been alive with celebration as they feasted for their patron saint. Musicians in crisp white shirts and thin black ties gathered in the gazebo in the center of town, filling the air with bold, brassy music. 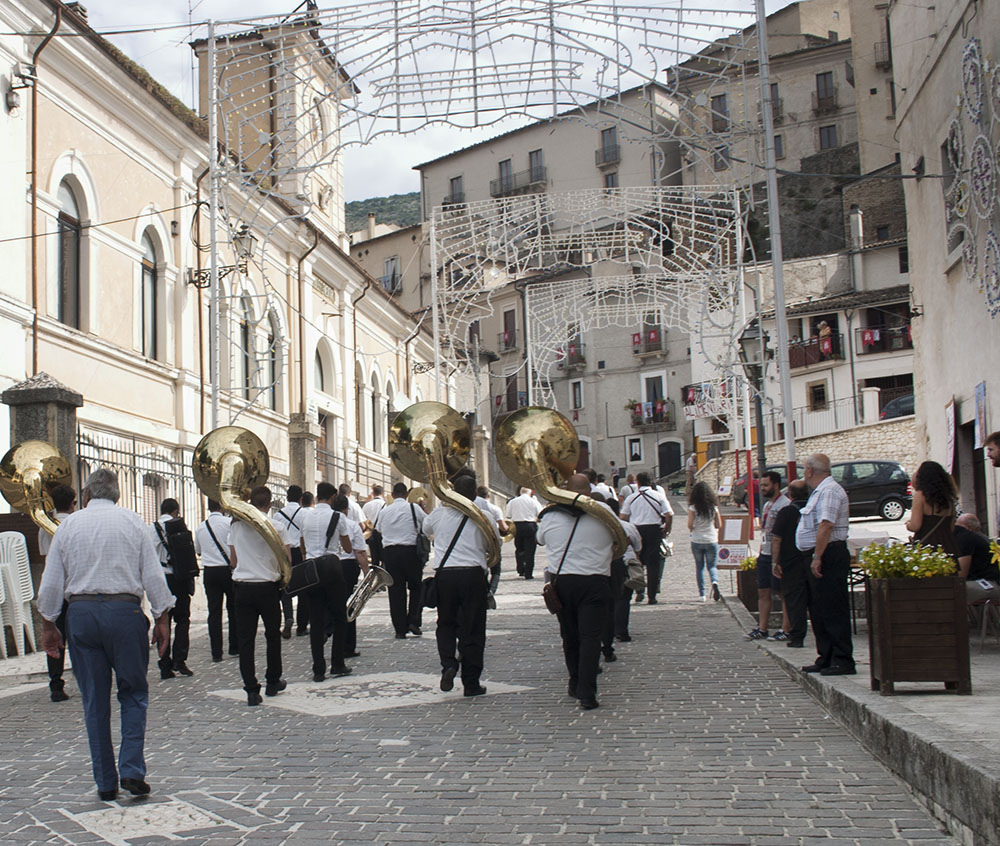 As the thunderous explosions continued outside, I ran through the list of disasters in mind that could possibly be occurring, trying to judge how prudent it would be for me to get out of bed. Suddenly, it dawned on me that nobody outside was running in fear for their lives. The city maintained its usual calm despite the loud sound. Then, the words of Thierry came back to me…“Italians are firework specialists! It’s like nothing you’ve ever heard”.

Fireworks. That’s what it was, not an impending apocalypse. But at eight o’clock in the morning? I shrugged and covered myself with the sheet again. I soon drifted off the sleep and forgot about my near-death experience.

Later, my mother and I strolled into the center of town to camp out in front of the Alimentari (the minimart) – our only source of wifi. We quickly tried to check our email and update friends and family of our wellbeing. We were never able to stand out there for very long before we were greeted by one of Thierry’s family members or curious members of the community. 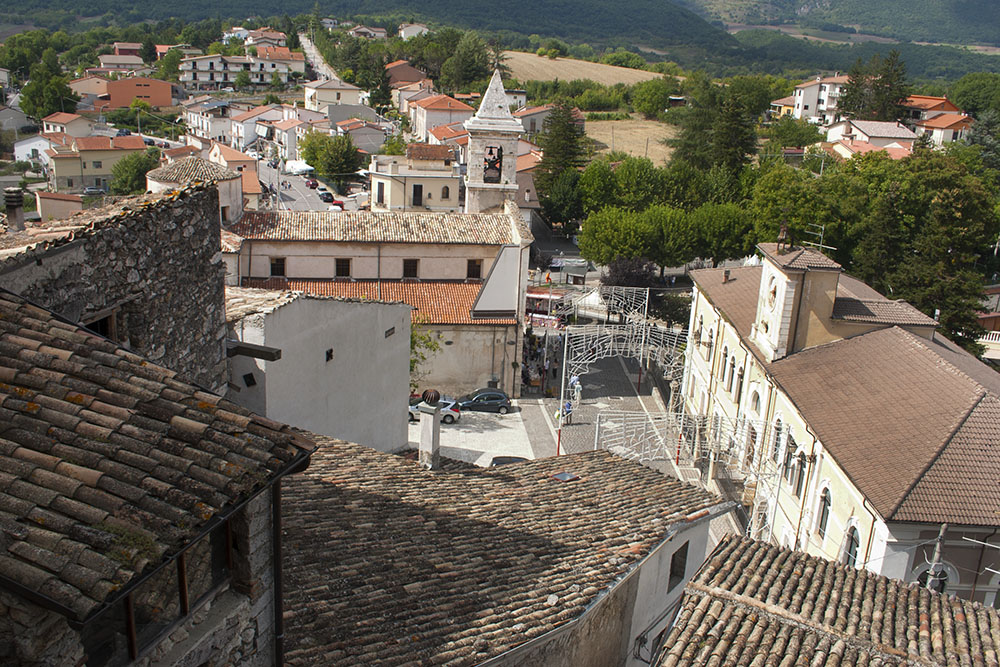 Apparently word had travelled fast about our arrival. Although there were a number of tourists in town for the feast, we were of particular interest because they’d heard that I was thinking of buying a house in the city. Everyone wanted to know more about the young, black American who might become their new neighbor. Very few people in the city spoke English, so I did my best to answer their questions in my halting combination of English, Spanish, and Italian while gesturing wildly. Many people broke into a grin, appreciating my efforts, while I cautiously pronounced the few Italian words that I knew.

Most of our time passed this way in a rush of delicious food, wine, and generous hospitality. When it became time for us to board the train back to Rome, I was gripped by an unexpected melancholy. It wasn’t the kind of sadness that you get knowing that your vacation is almost over. It was the kind of sadness you feel when you know you’re about to leave your home for a long time. 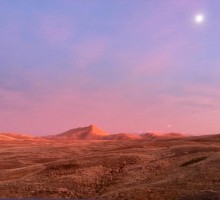