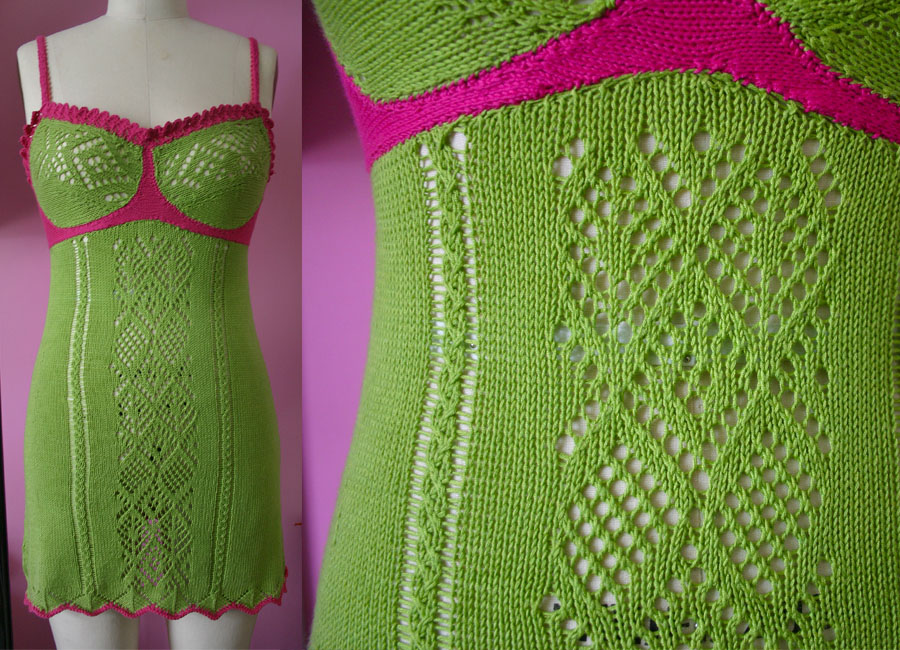 A Foray Into Lingerie

So my design ADD has kicked in again and I am now obsessed with idea of knit lingerie. I wanted to make stuff that is a little more comfy and sturdy while still being sexy so that you could actually sleep in it if you wanted to. So, I went about the task of studying and measuring some chemises that I had so that I could design my own. I already had the perfect yarn, this delightfully light and drapey cotton/bamboo yarn that I got in Shanghai last year. As I was working I realized that I was going to run out of yarn so I decided to add some pink accents with a cotton/silk yarn that I also got in Shanghai.

Most of the lingerie that I own has cups, underwires, and boning in it which looks great but is super uncomfortable to lay down in. I decided to forgo all of those design features and hope that adding a separate bra band to the design that fit perfectly would provide the desired support. I also knit the bra band in a slightly smaller gauge to make it a little bit sturdier. It worked out perfectly! I know you can’t tell from these pics because the dressform doesn’t have real boobs, but the bra band in conjunction with the nice stretchy straps that made gave a lovely subtle lift. Also the absence of all those stiff plastic and metal bits made it conform to my body perfectly and it stayed in place when I moved (I tested this very scientifically by dancing around in it and rolling around in my bed). 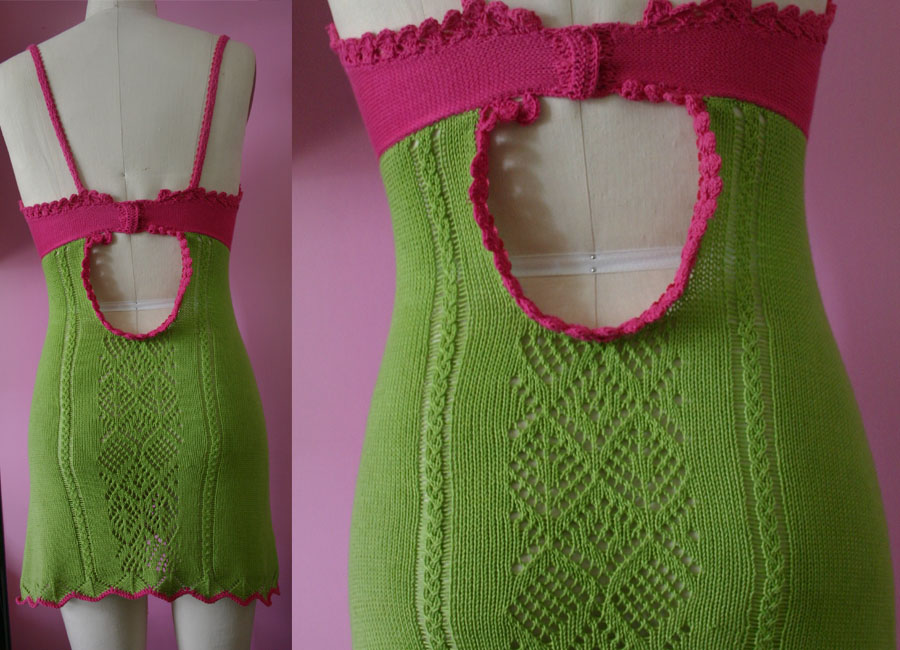 I noticed while searching Ravelry and other websites that many people that were making hand knit and crochet lingerie had a common fit issue. You want to know the secret to the perfect fit? Elastic. Elastic is your friend ladies, and yes that does mean that you’ll have to whip out the needle and thread. It is unavoidable. Your knit fabric will only stretch predictably in two directions so when you have curved edges like at necklines and leg holes it will not keep its shape. I come from a cut-and-sew background and I was taught this cardinal rule for working with stretch fabrics and it holds true for knits as well. To determine how much smaller I should cut my elastic than my fabric, I looked back at my other chemises. I measured the fabric while it was scrunched and then stretched out the elastic (being sure not to stretch the fabric as well) and measured the difference. 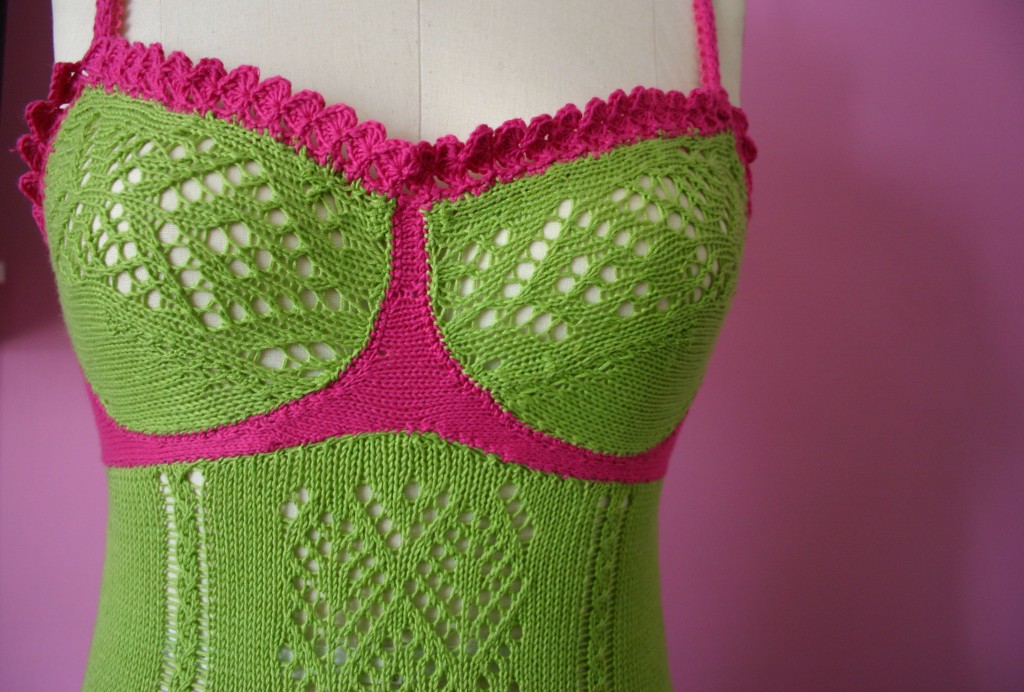 I cannot stress enough how important this step is. I tried my chemise on before I added the elastic and it was an ill-fitted mess. The neckline just sort of gaped and hung there. After adding the elastic, it fit like a dream. 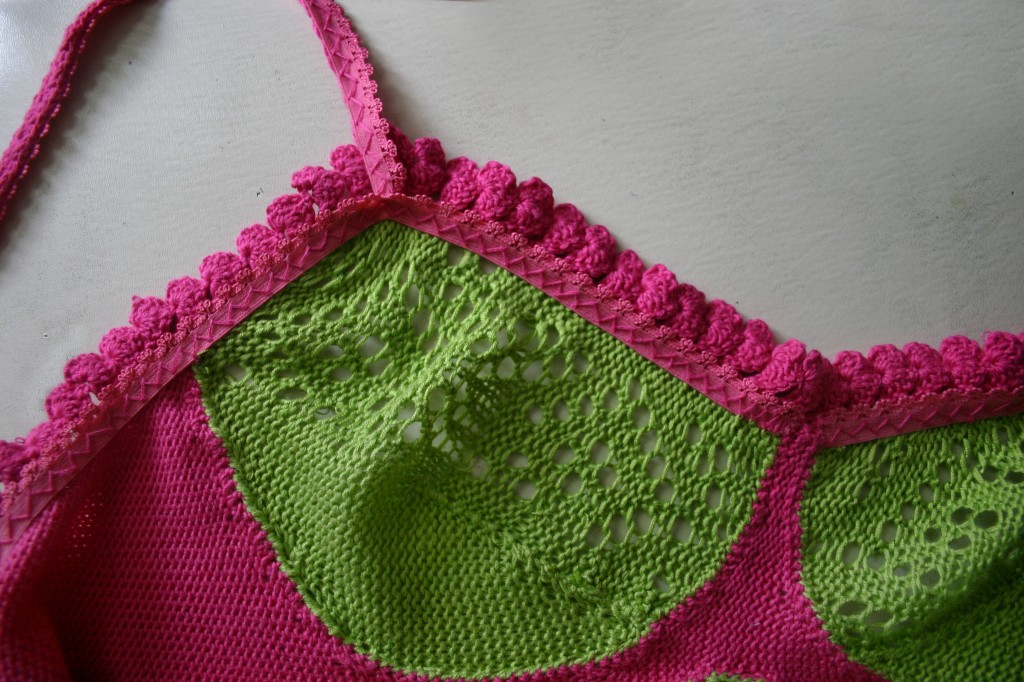 In other news, I checked out the lingerie exhibit at FIT today to get some inspiration for my next project. You aren’t allowed to take photos in there so I did some sketches on my tablet to remember my favorites. This bodysuit is making me want to knit a teddy with the rest of my pink yarn… 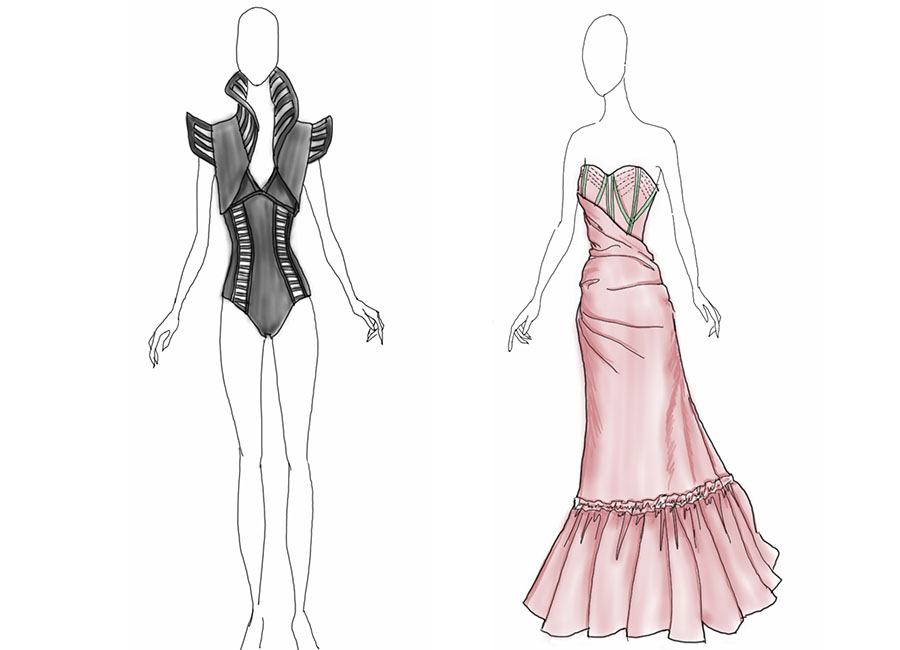 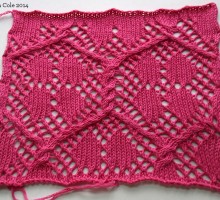 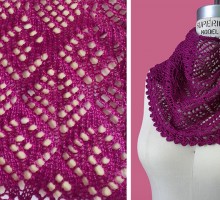 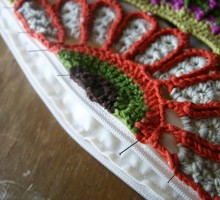 How to Line a Hand Knit or Crochet Bag